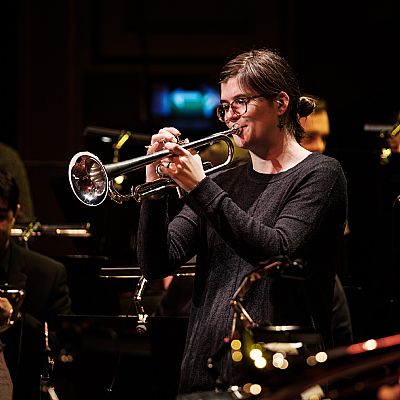 Laura Jurd only met Kenny Wheeler once, very briefly, but it was enough to convince her that she was right to be inspired by the late Canadian-born trumpeter who became such a key part of both the British and European jazz scenes.

Jurd, one of the leading trumpet players of a generation quite some years behind Wheeler, happened to be trying out a new trumpet in a shop in Luton when Wheeler came in with another veteran of the British trumpeting society, Henry Lowther, looking for a new flugelhorn.

“It was only a couple of years before he died, so he must have been eighty-two, and I just thought that it was really cool that he was still looking forward,” says Jurd down the line from the London passport office where she’s been renewing one of the travelling musician’s absolute necessities. “The other thing about that is, he had maintained his technique and it’s inspiring to know that someone you hear all these stories about, how he spent hours practising long notes, for example, could continue playing at such a high level right to the end of his life.”

These days, as a self-confessed “routine junky”, the Hampshire-born Jurd is happy to make the time, whatever she’s doing and wherever her schedule takes her, to put in the hours of practice it takes to stay in shape as a player. But her relationship with the trumpet wasn’t always quite so compatible.

“I’d love to be able to say that I was attracted to the trumpet but that wouldn’t be true,” says the soloist who will guest with the Scottish National Jazz Orchestra, playing Kenny Wheeler’s Sweet Sister Suite in Glasgow, Aberdeen and Edinburgh this weekend. “I was already taking piano lessons, and had been since about the age of five, when my primary school introduced brass instrument lessons. It could have been any instrument in the brass section but a trumpet became available and I went with that.”

By this time, aged eight, she’d already discovered that she liked to improvise, although she would put that down to just enjoying making things up, and the group classes she took with three other schoolmates were quite relaxed and geared towards making music fun. It was only later, in her teens when she tried to take her playing up to the next level, that the challenge of playing the trumpet dawned on her.

“Although I knew how to improvise I didn’t really know that this was such a fundamental part of jazz but then I started to discover the great trumpet players and realised that the trumpet was a key instrument in jazz,” she says. “So I joined youth jazz groups and through that I found out about great jazz trumpeters but at the same time I was discovering that the trumpet is a key instrument in other forms of music – in the brass section of an orchestra, in the horn sections in pop music – and I loved that versatility.”

Her first hero was Miles Davis, although the fact that he played trumpet was incidental to the weight and variety of music that buying his classic Kind of Blue album opened doors to, and from there she progressed through the jazz trumpet Who’s Who.

“There are lots of role models in jazz but someone I particularly admire is the classical trumpeter Hakan Hardenberger,” she says. “Not only is he seriously inspiring as a technician but he’s also done so much for the instrument through commissioning new music. There aren’t that many trumpet concertos, certainly not compared to the volume of work that’s been written for the violin or the piano, and he’s created a whole new repertoire that’s brought the instrument to the forefront. I’d love to say that I could play some of these pieces because they’re amazingly challenging but I’m happy to listen.”

Someone who is closer to her own world as a jazz musician is the Norwegian Arve Henriksen, who takes inspiration from the Japanese bamboo flute, the shakuhachi, and much else from other traditions as well as the jazz one.

“I find it really inspiring that his improvising comes from so many different musical worlds,” she says. “I mean, I love the jazz tradition but I particularly love people who add to it and keep moving forward. My tutor at Trinity Laban, Chris Batchelor, was like that, a true improviser. Every time he put his trumpet to his lips he played something new.”

Jurd graduated from Trinity Laban Conservatoire of Music and Dance, to give the London establishment its full name, in 2013, having arrived there via the National Youth Jazz Orchestra and she now teaches composition there as well as featuring with the 2017 Hyundai Mercury Prize nominees Dinosaur and working on a number of other projects. She is a member of BBC Radio 3's New Generation Artists and has won awards including the Dankworth Prize for Jazz Composition in 2011 and the Instrumentalist of the Year title in the 2015 Parliamentary Jazz Awards.

Her forthcoming gigs with the Scottish National Jazz Orchestra represent her second time guesting with the ensemble in concert. She was featured soloist in SNJO’s performance of the Miles Davis-Gil Evans collaboration Sketches of Spain last year. She is, however, familiar with Sweet Sister Suite, which SNJO commissioned Wheeler to compose in 1997, as she has already recorded it with the orchestra and for the first time audiences will be able to buy the CD of the music they’ve just heard on the way out of the concerts.

“It’ll be nice to come back to the suite,” says Jurd. “I really enjoyed playing on the recording and it’s actually a lot of fun to play. The great thing about Kenny Wheeler is that not only did he have a wonderful, completely individual, instantly recognisable tone on the trumpet and flugelhorn, he also created a world of harmony as a composer that is entirely his own. I love the way he plays over that rich harmonic sound, so that was inspiring, but there are also passages when I’m not playing that are just lovely.”

One of Wheeler’s traits as a composer was his liking for creating passages that evolve slowly and calmly. For Jurd, these constitute a special zone that she finds completely involving.

“The orchestra has to be really good – and the Scottish National Jazz Orchestra is all that without question – to be able to put across that sense of calm forward motion,” she says. “But although the music takes its time in places there’s also a real groove to it. You can hear that in Kenny Wheeler’s music generally, not just the orchestral pieces. His small group writing has a way of drawing the listener in and keeping you interested, entranced really, with its rhythmical progressions.”