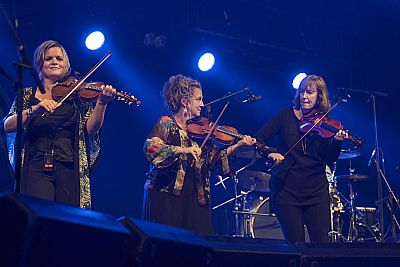 As they processed onto the Glasgow Royal Concert Hall stage back in January 2000, String Sisters gave not the slightest impression of being terrified. Here was a sextet of the international folk and traditional music scene’s top fiddle players slow marching to April’s Child, a tune brought to the group by Annbjorg Lien, the Norwegian representative in a Shetland, Irish, American, Canadian, Scandinavian troupe.

Their sound was richly harmonic, stately and measured, although the two days preceding this debut were, recalls Shetlander Catriona Macdonald, frenetic.

Macdonald had conceived the idea – there was word at the time that it had come to her in the bath – of gathering top women fiddle players into an ensemble that would celebrate all of their traditions. She took this to the then director of Celtic Connections, Colin Hynd, who immediately got behind it. Hynd it was who did all the contacting and negotiating, a laborious task in these pre-email days, and when he put it together, as Macdonald says, he didn’t hide it away in some corner of the Celtic Connections programme.

“It was a Friday and on the mainstage of what by then had become established as a major festival,” says Macdonald. “And everyone was excited. We hadn’t actually met before but we got together and thought, give it a few days’ rehearsal and it’ll all be great. Then, of course, reality hit us. There was an awful lot of music to learn and we began to think, maybe we’ve bitten off more than we can chew. But we just got on with it and put the concert together, and the chemistry between us felt really strong.”

Macdonald’s intention wasn’t to form a band that, eighteen years on, is still together and looking at exploring new territories. As someone who had been in the line-up of another supposed one-off fiddle celebration, pan-Highlands and Islands supergroup Blazin’ Fiddles, she might have known that String Sisters would develop a life of its own.

“The original idea came to me after I’d been touring a lot with the accordion player Iain Lowthian in Ireland, the US and the UK during the 1990s,” says Macdonald, who these days is Senior Lecturer and Degree Programme Director in Folk and Traditional Music at the University of Newcastle as well as being a gigging musician.

“I was aware through my CD collection that there were a lot of amazing female fiddle players – Mairead Ni Mhaonaigh, with Altan, and Liz Carroll being two who came into String Sisters – with great energy and drive. Yet we never seemed to meet each other. This is quite topical at the moment with the movement towards equality in festival programming and other areas of the music business, but back then it seemed that you would only find one band with a female fiddle player in it at any festival. I wasn’t sitting worrying about it; I just thought it would be amazing to play with your peers.”

In Colin Hynd she found a festival director who was only too willing to make it happen and rebook the band the following year, leading to its continuation. The comment that tickles Macdonald most when people see the cover of Between Wind and Water, the String Sisters’ recently released second album (their individual schedules have meant that the group hasn’t been prolific) is, “But there’s men in it!” This is down each of the fiddlers bringing an accompanist to the first concert. In Macdonald’s case she brought her regular rhythm section, pianist David Milligan, bassist Conrad Molleson and drummer James Mackintosh who became the nucleus of the String Misters, a backing band that would come also to feature Norwegian guitarist Tore Bruvoll.

“There was an element of pragmatism in taking my band on the road,” says Macdonald. “But it was also part of the band chemistry. It felt right and knowing the guys would have whatever we wanted to do covered, it let us get on with choosing the music, which because I was close to the Scandinavian scene – Annbjorg and I have known each other since we were twelve or thirteen – I wanted not to be just Celtic.”

From the start the combination of six fiddle players each lending their own styles, accents and bowing techniques to the ensemble gave String Sisters a richness of sound that might even have surprised Macdonald.

“I had no preconceptions of what it would sound like,” she says. “I thought it would sound good but when we started to work on each other’s music it was interesting how the different approaches came together. In Scottish and Irish music the fiddle is used to carrying the melody and certain players, Liz Carroll for instance, would have felt that playing the melody was their place, whereas Liz Knowles, Annbjorn and I naturally gravitate towards harmony. There’s also a grittiness and dissonance in Scandinavian fiddle playing that adds to the fullness of the sound and of course we wanted Mairead to bring her wonderful Donegal bowing and ornamentation.”

As well as their instrumental capabilities, Mairead Ni Mhaonaigh and Emma Hardelin, who replaced original member Natalie MacMaster, from Cape Breton, when she had to step down due to work commitments, bring very distinctive voices to the group.

On the new album Ni Mhaonaigh sings Wind and Rain, an American version of the Scottish ballad The Twa Sisters, and Hardelin draws on the Swedish song tradition with the strikingly dramatic tale of unrequited love and betrayal, Det Bor I Mina Tankar.

“The songs are an important part of what we do,” says Macdonald. “Although the idea of the group is and always has been to highlight women instrumentalists, there have been many, many great women singers in all of our traditions and having two fiddle players who could stand out as singers in their own right in the line-up, it would be silly not to feature them. There’s something very earthy and authentic, almost uncompromising, about Emma’s singing that adds another dimension to what we do as a group and underlines the point about us all doing what we do in our own vernacular, although we also have great fun trying out each other’s dance tune styles.”

After eighteen years, with only a few adjustments in personnel, String Sisters has become a family unit. Some of the musicians have become mothers (and fathers) during the time they’ve been working together and for Macdonald the sense of having a friendship group to call on has become increasingly reassuring and important.

“We’ve become part of each other’s families, as well as bonding as a kind of family unit, and that makes it easier to decide things. It can still be a logistical nightmare having band members in so many different countries, different time zones even. But when we decided we needed to make a new album we were able to post tunes on an internet platform and everybody could learn them. Actually, we could have made several albums with the tunes that collected there but it shows there is lots of life in the band. We have America in our sights for next year, because we haven’t really addressed the two Lizzes’ homeland. We’ll probably end up playing together in some String Sisters old folks’ home but we’re a long way from that.”