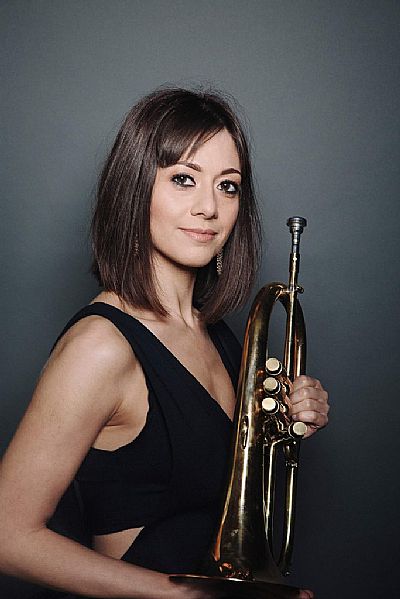 Yazz Ahmed is talking about the cultural melting pot that has fed into her music. As a child growing up in Bahrain the trumpeter, who plays the closing concert at Glasgow Jazz Festival this weekend, heard Arabian music as part of everyday life. At the same time, her mother, a former ballet dancer who was also a reggae fan, would play classical music – and reggae – at home.

And in the background, but shortly to come to the foreground, was Ahmed’s maternal grandfather, Terry Brown. A trumpeter who worked with the great British jazz players of the 1950s, including John Dankworth, Ronnie Scott and Joe Harriot, before becoming a record producer who oversaw recordings by musicians ranging from Acker Bilk to bassist-adventurer Graham Collier, Brown was the catalyst for Ahmed’s interest in playing the trumpet.

“My family moved to London when I was nine and I was offered the chance to have music lessons at school,” says Ahmed down the line from a recording studio in London having just flown in from Lisbon, where she was doing another session earlier in the day. “The only person I really knew who played an instrument was my grandfather, so I decided I wanted to be like him and become a trumpet player.”

Terry Brown, by then retired from playing due to his production work taking precedence over gigging, gave the youngster her first lesson, teaching her the C major scale, and he became an inspiration when he later took up playing again and Ahmed heard him practising.

“He would play scales to get back into shape and it sounded amazing to me,” she says. “So I didn’t really need to be told to practise, I could hear why it was important, although I really enjoyed playing anyway.”

Her grandfather also encouraged her by making sure he was present at school concerts and when she joined the Merton Youth Jazz Orchestra he’d go along and listen to her.

After graduating from the Guildhall School of Music and Drama in 2006 Ahmed formed her own band and began composing. She was, she says, desperate to have her voice heard and say something personal through her music and found this a challenge in a London jazz scene that was crowded with musicians, all trying to get promoters and critics’ attention.

Her early compositions reflected the music she’d been playing and listening to at the Guildhall, mostly featuring Blue Note artists including saxophonist Joe Henderson and trumpeter Woody Shaw. But she began to feel that this music, much as she’d loved it and learned a lot from it, wasn’t indicative of who she was as a person or as a musician.

“There was something missing,” she says. “And then I came across a record, completely by accident, that gave me a new perspective, Blue Camel by Rabih Abou-Khalil, a Lebanese oud player.”

Abou-Khalil, who has collaborated with jazz musicians including saxophonists Sonny Fortune and Charlie Mariano and trumpeter-flugelhorn player Kenny Wheeler, made Ahmed think of the music she heard in the streets and on the radio when she lived in Bahrain. And hearing him playing with Wheeler convinced her that she could merge the sounds and flavours of her homeland with the music she’d studied in London.

“Reconnecting with the music of my childhood home has been a major inspiration to me both in my life and in the way I write music,” she says. “At the same time, though, I can be inspired by all the different musical styles I find myself working in as a session musician. I’ve been lucky enough to travel quite a bit as a musician – I’ve played in New York, Kuwait, Ukraine, Algeria, Berlin, Paris, and Istanbul with my own band - and I’ll take something from different places as well.”

As a session musician she’s worked with musicians as diverse as Radiohead, reggae star Lee ‘Scratch’ Perry (her mum would be pleased), ABC, Swing Out Sister, and Joan as Police Woman and she has also toured the world with art-rock band, These New Puritans.

“There’s not as much studio work as there used to be due to music being programmed and producers saving money by not using real instruments,” she says. “But there are still gigs to be had. It’s down to luck, really. Someone recommends you, so you go and do the job and hope it works out, and when it does that might lead to something else.”

Her own music and composing have kept her increasingly busy in recent years. In 2014 she was awarded a jazz fellowship from Birmingham Jazzlines, who supported her through a year spent writing a major new suite, Alhaan al Siduri, which was premiered in October 2015 at the CBSO Centre, Birmingham. A year later the suite’s second performance marked her debut in her paternal homeland at the Bahrain International Music Festival.

The gender imbalance in jazz is something she feels very strongly about, although she recognises that attitudes are changing for the better. Events such as Berlin Jazz Festival, which has  programmed equal numbers of male and female bandleaders, and Glasgow Jazz Festival, which has entered a partnership with the Keychange Project, which aims to encourage music festivals to have a 50:50 gender balance by 2020, are setting good examples.

Just dropping the prefix, female, from the words musician, composer and bandleader would be a major step in the right direction, she says, adding that you wouldn’t expect to hear a man introduced as a male trumpet player.

“It’s a great band and I’m really looking forward to playing with these musicians,” she says. “We’ll be playing music from my latest album, La Saboteuse and parts of my suites, Alhaan al Siduri and Polyhymnia, and I’m planning to have visuals to accompany some of the music to make it really special.”

For Ahmed, live music should be an immersive experience for the audience, something that takes them away from their everyday cares and offers an escape of some sort.

“I love the feeling in a room when the music is grooving and everyone’s enjoying themselves,” she says. “What we’ll be playing will certainly be groovy [your correspondent can vouch for her rhythm section’s grooving credentials] and I want people to lose themselves in the groove, the textures we make, the freedom of the moment and the space we create. I want to give them a mesmerising experience before they go back to work the next day.”