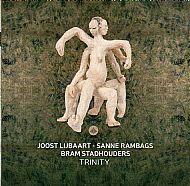 In the small theatre in LantarenVenster, Rotterdam’s ideally equipped arts venue just round the corner from the spectacular Erasmus Bridge, three musicians are creating a sound that is concentrated, searching and seems in part to be communicating words and feelings from another time, another place.

The main focus for these eerie yet compellingly attractive, otherworldly phrases is Sanne Rambags, the young vocalist whom drummer and percussionist Joost Lijbaart brought together with guitarist Bram Stadhouders to form Under the Surface, a group that has become collectively very accomplished at making spontaneous magic.

With the benefit of having heard them perform twice more in Scotland and particularly on this, their second album, just how accomplished and magical this trinity has become has been brought home emphatically.

Their music is not designed to accommodate such habits such as shuffling tracks or making personal compilations. It is intended to be experienced at a stretch, so that the whole performance becomes, to take an overused term, a journey. This is not a journey that begins with the musicians having no idea what the outcome will be. There are pre-chosen lyrics and poems and a series of sketches as back-up that they might arrive at together – or not alight on at all. Each time they make this journey, however, the results will be unique to the particular occasion.

They do this by playing, listening intently and responding to one another with supreme empathy. The opening track here, La Loba – Part One, is Under the Surface in microcosm. Sanne’s singing has the air of a folk melody. It could come from the Sami tradition that is in her DNA and it contains tones of anguish as well as sweetness, and as she becomes apparently possessed with a mysterious calling, Bram’s guitar and Joost’s shakers, bells and drums become more urgent. This is musical drama of a high order, intense and yet measured, the vocals soaring and ecstatic, almost churchy, while the guitar picks out a progressing song form and the drums provide insistent locomotion.

As the album continues there are further examples of a group that has now, not only taken its music around the world - to Africa, Central and South America and across Europe – but also brought the world’s music into its own. African chanting; the sounds (created by Joost’s finger percussion) of rain forest fauna; a folk dance that Sanne intones wordlessly and Bram picks up and develops; and the zither-like pattern that introduces Hjemme: these all add to a work that manages to be simultaneously understated and colourfully atmospheric.

The haunting You Will Rise needs little or no accompaniment to Sanne’s singing, with its soft, clear diction giving the sense that the song is being addressed personally to the listener. Later, on the track whose title could be said to sum up Under the Surface’s modus operandi, Calling up the Spirits, Bram introduces a guitar figure that builds and propels, aided by Joost’s productive but still measured drumming with beaters, Sanne’s intensifying singing to great heights while keeping a clear picture of what’s needed without pushing the music over the edge.

There is a school of thought that says that recording and releasing music that the players create entirely in the moment defeats the purpose of such an endeavour. That is a discussion for another day. With this album, Under the Surface have documented their live performance as it was ‘on the night’ and in doing so they have produced a piece of music that hangs together as if it was composed and conceived as an album and repays repeated listening with tremendous satisfaction.