Zoe Francis - Bringing them into Blossom 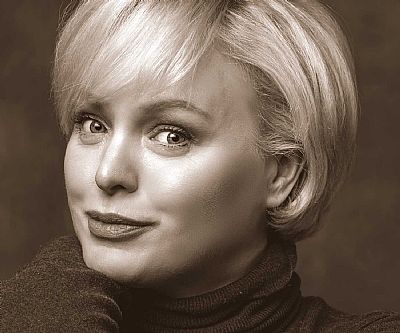 New York can change people, they say.  Zoe Francis went there as a dancer and when she returned to the UK nine years later she was a jazz singer, something that the London-born Francis says had never entered her mind before.

Francis, who tours her Remembering Blossom Dearie tribute to the late great singer-pianist in Scotland during the week beginning November 5, had only gone to New York for a holiday. However, she ended up staying, initially working as a nanny and then a clothes shop manager before she started her own de-cluttering business, a service New Yorkers with their trim, attic-free apartments are happy to employ.

One of the attractions New York held for Francis was the workshops held there in honour of the film and musical choreographer Bob Fosse. She had grown up in Northern Ireland, where her parents were both artists, and then Lincoln, where she became interested in dancing through watching Fred Astaire and Ginger Rogers films. She later realised that these films gave her an introduction to the Great American Songbook, the jazz singer’s first source of repertoire, but jazz singing was still a long and circuitous route away then.

“I toured with a contemporary dance company when I was in my teens and I did some acting but in my early twenties I developed really bad eczema and this made auditioning quite difficult,” she says. “So a friend invited me to New York and after I’d done a few of the Bob Fosse workshops I decided to make the most of New York. I studied flamenco dancing for a while and then I found out that there’s a really strong tango scene there. All the stars from Buenos Aires come to New York to teach as well as perform, so I got to dance with some really famous tango artists like Pablo Veron, who starred in The Tango Lesson and Orlando. It was quite a spectacular experience.”

Francis’ next adventure took her into jazz clubs including the Jazz Standard where she heard a celebration of the music associated with ill-starred trumpeter Lee Morgan and saxophonist Hank Mobley. Among these tunes were instrumental versions of some of the songs she knew from Astaire and Rogers’ films. Intrigued, she started frequenting jazz clubs and was pointed in the direction of Tower Records, where the jazz buyer recommended albums she should listen to.

“It was instrumental jazz that I was interested in at first, mostly because I knew a lot of these tunes and it was amazing for me to hear them being played quite differently from how I remembered them,” she says.

In time she became interested in singers, including Carmen McRae, and although she still wasn’t thinking about becoming a singer at this point, some musician friends suggested she go along to the weekly workshops run by the great pianist Barry Harris in the Lincoln Center.

“They said it was okay just to go for fun – you didn’t need to be a professional musician – so that’s what I did, and for the first three or four weeks, I just listened,” she says. “Every week there would be a long line of singers stretching all around the room. Some of them were professionals, others were like me, complete beginners, and eventually I plucked up the courage to sing and started to really enjoy it. Then after about six months some of the good singers took me to this jam session in Brooklyn and that was a great experience.”

Emboldened she started to investigate more singing opportunities and happened upon Arturo’s, a pizzeria with live jazz in Greenwich Village, where the respected pianist Harry Whitaker had a long-established residency with an open mic for singers dropping in. Whitaker became something of a mentor, especially after the night when Francis got up to sing and had to follow Rickie Lee Jones and precede Madeleine Peyroux, and when she started to get gigs in Manhattan coffee houses he would accompany and encourage her.

“I found all the musicians I worked with really supportive,” she says. “People like Harry Allen, the saxophonist, and Warren Vache, the cornetist, would all say really nice things about my singing and that gave me confidence to do more but then 9/11 happened and the atmosphere around the New York changed after that. Not so much with the musicians and the music scene, just generally, and in 2004 I decided to come back to England.”

Fetching up in Devon, where she didn’t know any of the local musicians, wasn’t perhaps the most logical step for Francis’ singing career and she took time out to train as a yoga teacher before moving up to Bristol, which has a much more vibrant music scene. Two Scots entered her life around this time, one, the Perth-born pianist Dave Newton, who lives in nearby Bath, became Francis’ regular accompanist and the other, Glaswegian guitarist Jim Mullen, whom Francis met on a gig, would become her husband after she moved to London.

With the support of Mullen, a legend among jazz aficionados who has played with musicians including big-swinging pianist Gene Harris, Hammond organ master Brian Auger and blues singer Jimmy Witherspoon and was referred to as “God” by the late Chicago soul-folk poet Terry Callier when he played in Callier’s band, Francis developed her Blossom Dearie repertoire.

Sometimes described as falling between cabaret and jazz, the New York-born, sometime Paris-based Dearie preferred to be known as a singer-pianist and was highly skilled in both of these arts. She was a regular at Ronnie Scott’s in London and a big favourite of the owner for her deadpan wit, which was not dissimilar to his own, as well as her understated but profound musicality.

“I got to see Blossom when I was living in New York,” says Francis. “She was playing in Danny’s Skylight Room, one of her favourite venues, and although she was quite old by that time, her voice was still so pure. I loved her phrasing and the way she made songs tell a story was captivating. A lot of what she did sounds simple on first listening but that’s because she made everything sound effortless. Nowadays, it seems that people are looking for technical acrobatics from singers, but what appealed to me, and still does, was that Blossom sounded so contained. She never over-egged anything and she was very witty. She made everyone laugh.”

Another aspect of Dearie’s appeal for Francis is her choice of songs. Although she covered established writers such as Rodgers & Hammerstein, Dearie particularly championed emerging composers and was especially fond of cleverly crafted lyrics.

“She was always looking for interesting songs and she helped to establish Dave Frishberg, for example, who wrote I’m Hip and Peel Me A Grape,” says Francis. “People actually thought she wrote a lot of the songs she sang, because they hadn’t heard them before, but what she was really doing was bringing on the next generation of Great American Songbook writers. We’re not trying to copy her – we do The Riviera quite differently to her version – but she’s quite underrated now and we’d like people to appreciate her more.”