Fergus McCreadie - playing Ronnie's and getting the full Monty approval 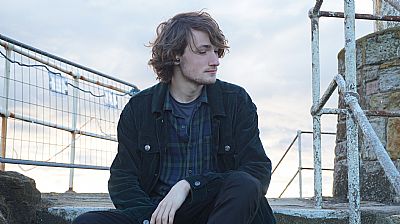 These are exciting times for Fergus McCreadie. The outstanding young pianist from Dollar in Clackmannanshire has experienced a number of special moments over the past year, from winning the Best Instrumentalist title at the Scottish Jazz Awards last June to appearing in the final, televised on BBC Four, of the BBC Young Jazz Musician 2018 in November to making his debut at the world famous Ronnie Scott’s jazz club in London in January and quickly being assured that his trio will be welcome back.

The trio’s two nights at Ronnie Scott’s were probably the most surreal of these experiences as immediately he walked up the steps to the club McCreadie became aware of the history this room holds.

“Everyone who is someone in jazz has appeared on that stage,” he says. “And when we made the walk from the dressing room onto the stage it was amazing to feel part of that lineage of people who have made that same walk. We felt we’d played well on both nights and the feedback we got was really encouraging.”

Also encouraging was the response McCreadie got from one of the judges of the BBC Young Jazz Musician final in particular. Although he didn’t win – Birmingham-based saxophonist Xhosa Cole took the honours – McCreadie was heartened to be approached backstage afterwards by Monty Alexander, the great Jamaica-born pianist, who had listened closely to McCreadie’s playing.

“It was pretty awe-inspiring knowing that Monty Alexander was sitting out there in the judging panel,” says McCreadie. “But he made some interesting comments, especially to do with repertoire. I’d included a Herbie Hancock tune in my set, alongside two of my own tunes, and Monty Alexander said I should forget about playing other people’s material and concentrate on my own compositions because it’s more important, and more fulfilling, to play music that comes from your own experience. He’s been playing for a lot longer than I have, obviously, but in a way I feel I’m doing a similar thing to him. He plays music that reflects his Jamaican heritage and my own compositions are very Scottish, although they have elements of the American and Nordic jazz traditions, too. So hearing someone like that giving his endorsement was a real boost.”

The Scottish aspect of McCreadie’s work has developed naturally. He played the bagpipes – not too successfully, he concedes – in his very early teens and didn’t think too much about Scottish music after he started to concentrate on the piano, being more concerned with Oscar Peterson, Keith Jarrett and Brad Mehldau, among many others in the jazz canon.

When he arrived in Glasgow to study on the Royal Conservatoire of Scotland’s jazz course, however, it was impossible to avoid the Scottish traditional music that fellow RCS students were playing in local sessions. He also takes inspiration from the Scottish landscape. Several of the tracks on his debut album, the enthusiastically received Turas, released last Spring, stemmed from visits to, or just being around, specific places.

“There was one track that is essentially the equivalent of a set of tunes, the way that traditional musicians join a jig, a strathspey and a reel together but mostly the ideas came from trying to create a sense of place,” he says. “I’m also a huge fan of the Irish folk band the Gloaming and I think some of their music might have seeped into what I do because I’ve listened to them so much.”

He graduated from the RCS last summer and set out on his full-time professional career by playing with his trio at three major jazz festivals – Glasgow, Edinburgh and Oslo. As well as his own group, he works with drummer Graham Costello’s much-acclaimed STRATA and saxophonist Matt Carmichael’s quartet and takes other gigs as they come up. He’s appeared, on keyboards, for instance, with the Glasgow-based jazz-funk-folk juggernaut Fat-Suit from time to time.

The piano, bass and drums format is where he sees his future, though.

“I get my enjoyment of playing in other line-ups through working with other people’s bands,” he says. “But for me, the piano trio is a very natural combination of instruments in the way they work together and complement each other. Also, because it’s so compact the interaction between the musicians is more intense and the group dynamic can vary more easily between quiet reflection and full-on energy surges.”

He has now worked with the musicians in his trio – bassist David Bowden and drummer Stephen Henderson, both of whom were a year or two ahead of him at the RCS – for coming up for four years and they’ve grown together as a unit.

“I love working with Dave because he has such a great sound on the bass, such a lovely tone that he just needs to play one note and I feel I can go anywhere musically,” says McCreadie. “And Hendo is so versatile. He can bring the fire and create intensity but he can also change the mood at the drop of a hat. He’s also an inspiration in the way he comes up with ideas in response to the music.”

As the trio has grown together so has McCreadie’s approach to composition developed.

“With the tunes on Turas, I think it was a case of me writing something for the piano and bringing it to rehearsals to see what Dave and Hendo could add that was appropriate,” he says. “We’ve been working new material into the set recently and the big difference, for me, is that I think I now write for the trio, rather than just for me, and the trio has become more of a unit. It’s like the trio has become the instrument, if you like, and rather than two of us maintaining the pulse while the other one solos, we’re kind of all soloing together now, all moving the ideas forward and all feeding into the music as one.”