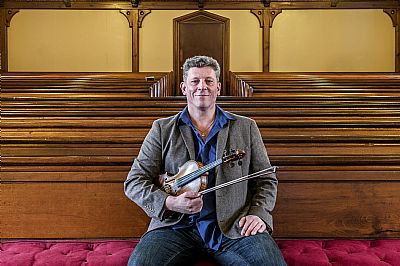 Paul Anderson is describing how his latest album, Beauties of the North came into being. All sorts of music industry links feed into the story, many far removed from what might be expected of a largely solo Scottish fiddle recording. The recording engineer who captured the Eurovision Song Contest the year Abba won with Waterloo gave his input and experience gained from working on the Old Grey Whistle Test during the programme’s heyday went into assessing the music’s quality.

There’s also a contribution, on piano, from the late George Donald, of comedy revue team Scotland the What. Much to Anderson’s delight, as a fan of the Corries, the combolins, made by Roy Williamson and featured on Corries albums such as Strings & Things, also make an appearance, as does guitarist Tony McManus.

“I was aware that what I was doing, an entire album of slow airs and laments, wouldn’t be everyone’s cup of tea,” says Anderson down the line from his home in Tarland, in Aberdeenshire, among the countryside that has informed his own music. “There was also the thing that an entire album of unaccompanied fiddle might be beyond the pale for some. So we added accompaniment to some tracks to make it more appealing.”

Anderson might be right about the accompaniment being necessary but earlier this year on Facebook he was dealing with requests for him to play exactly the sort of tunes the album features, solo and unembellished beyond his own rich musical expression. He was going through chemotherapy treatment at the time, having been diagnosed with Non-Hodgkin’s Lymphoma, and although he mostly dealt with this through keeping himself busy, playing music acted as therapy.

“The Facebook thing actually started when a fiddler from Northumberland got in touch and asked about a particular tune and I thought, I’ll just pop down to Migvie Kirk and record it,” says Anderson. “Migvie Kirk is only a couple of miles away and it has this lovely acoustic. It’s used by a group of singer-songwriters for a retreat they organise every year that’s had people like Beth Nielsen Chapman as its guests. Anyway, I went down and recorded the tune and posted it on Facebook and the next thing that happened was I started getting requests for this tune and that tune.”

The resulting sessions would form a master class in Scottish fiddling and might have made a great album, had Beauties of the North not already been in the pipeline.

“I was recording these tunes in the kirk for other people but it was also for my own enjoyment and for my own benefit,” he says. “I was lucky with the chemo treatment in that although it gets tiring, I never felt physically sick. I’ve known people who had a terrible time with it but aside from my arms getting sore with the chemo going up through my veins, I had no serious side effects. The other thing about Migvie Kirk is that the acoustic is very forgiving; you could play almost anything and it would sound good as the notes hang in the air and blend into each other. It’s not so good for dance tunes because of that but for airs and laments it’s ideal. People seemed to be enjoying what I was doing anyway, so that made it worthwhile.”

Beauties of the North had quite a long gestation period. The idea came about some twelve years ago when Iain McLay of Moidart Records, with whom Anderson released his The Singing Land album in 2001, suggested that Anderson record an album of popular Scottish tunes for the tourist market.

“Iain wanted tunes like The Skye Boat Song and Loch Lomond, and there’s nothing wrong with that repertoire, but I really felt that if it was an album of beautiful Scottish music he wanted, then I’d rather record pieces from the traditional Scots fiddle repertoire,” says Anderson, who began playing fiddle after he discovered an old French violin under his grandparents’ bed at the age of five. Now recognised as the leading exponent of the North-East style of playing, through his former teacher, Douglas Lawrence, he can trace his musical lineage through the great Hector MacAndrew, who once gave a televised fiddle lesson to Yehudi Menuhin, back to the father of Scottish fiddling, Niel Gow.

Iain McLay introduced Anderson to his friend Dave Sinton, a session guitarist and sound engineer who was a close friend of the Corries’ Roy Williamson. Sinton had done restoration work on the combolins – one a guitar, mandolin and bass combination, the other comprising guitar and bandurria – hence their appearance on Beauties of the North.

With Sinton at the controls, Anderson recorded twenty-four slow airs as test pieces to see if they fitted what McLay had in mind. At this point, the ‘Abba connection’ – former BBC engineer Alan Spence, who had also mastered the Corries’ live album series - became involved. Spence approved the fiddle tracks but suggested adding some accompaniment. And so began a series of further recordings in different locations followed by a series of events – Spence and George Donald, who’d added his beloved Steinway, both died, Anderson got married, McLay retired – that conspired to bring the project to a halt.

Anderson’s vision of an album of beautiful Scots fiddle music, with tunes by Niel Gow, Hector MacAndrew, James Scott Skinner, William Marshall and others, might have remained in the vaults. Then, a couple of years ago he went to Shetland, as a part of a project that brought youngsters from East London and Shetland together through music, and met Sinton, who had moved to Unst, the most northerly point of the British Isles, and set up a recording studio at the former RAF social club at Saxa Vord. They talked and after sifting through the existing recordings, Anderson recorded enough tracks to complete the album at Sinton’s studio.

Beauties of the North isn’t intended, he says, to be the definitive album of Scottish airs and laments but as with the recordings he posted on Facebook while undergoing chemotherapy, the tunes are ones he loves playing.

“I like playing dance tunes, too, but there’s a special quality to slow airs,” he says. “They’re really songs without words and can be incredibly descriptive. It’s funny because I always tell my pupils that, if they’re going to play a slow air, they should learn as much about it as possible because it will have been written for a reason, to commemorate some event or another. And there’s a tune on the album, Mrs Jamieson’s Favourite, and I couldn’t find out anything about this Mrs Jamieson or why the composer, Charles Grant, wrote it.”

This is a rare gap in the knowledge of a musician whose playing can impart a very strong sense of place.

“I think you have to be descriptive when you play these tunes,” he says. “You want the listeners to hang onto every note and be moved because you’re really telling a story. Fyvie Castle is a good example because it features the green lady who comes down the stairs as the melody descends. I often play that one to primary school kids and ask them to imagine a film and tell me what that film would be about. They come up with all sorts of responses – someone’s died, there’s been a battle, there’s a ghost – and I’m not looking for the correct answer but invariably they catch on to the dark drama. The tune’s like a horror movie, so I figure I must be doing something right.”

Paul Anderson’s Beauties of the North is out now on Fingal Records.