Tim Garland - Chick, Ronnie and me 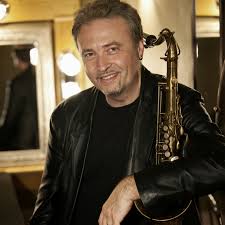 There’s a sense of accumulated experience about the music Tim Garland brings to Scotland this week and about the musicians he’s bringing with him, pianist Jason Rebello and double bassist Yuri Goloubev.

Saxophonist-composer Garland jokes about reaching the grand old age of 52 as we chat down the line while he sits on the M4, making slow-to-no progress to rehearsals in Bath with the west country based Rebello and Goloubev. But he’s in no danger of running out of ideas as he keeps adding to his already impressive list of orchestral and various other commissions and his appetite for making music has been sharpened by getting together with his colleagues in the Weather Walker Trio, as they’re known collectively, to feature the music on his latest album.

Garland and Rebello are old friends. Scottish jazz listeners with long memories will recall a teenage Rebello starring with a not much older Tommy Smith in the late 1980s. It was around the same time that Canterbury-born Garland made his own Scottish connection, forming the Celtic-jazz group Lammas with guitarist, now multi-award-winning poet Don Paterson. Rebello guested on Lammas’s second album, This Morning, in 1994, and played a major role on Garland’s Enter the Fire album the following year.

By this time Rebello had released his own debut album, A Clearer View, which was produced by no less a jazz personage than former Miles Davis and Weather Report saxophonist, Wayne Shorter, and between them, Rebello and Garland were on their way to creating more big-name connections. Rebello went on to work with Sting, Jeff Beck, Chaka Khan and Peter Gabriel, and Garland, having gone back to the source of British jazz by joining saxophonist and club owner Ronnie Scott’s band, landed a nigh-on eighteen-year gig with piano and keyboards master Chick Corea.

“The great thing about reaching this vintage and the great thing about working with Jason again,” says Garland, “is that although our careers went off on these parallel courses and we didn’t see each other much over the years, we have this shared history. We’re roughly the same age – I think he’s a couple of years younger – and we listened to a lot of the same music when we started out. So when we get together to play there’s this immediate understanding between us. Yuri’s a really experienced player, too, and you get the cumulation of a lot of gigs, a lot of tours, a lot of playing when the music begins.”

Rebello unwittingly played a part in Garland coming into the orbit of Chick Corea, a dream connection that Garland, a Corea fan, would never have expected to make. In 1999, Garland was playing in a group with another American, vibes virtuoso Joe Locke and went over to New York to visit him.

“Joe always gets straight to business and immediately I arrived at his apartment he was asking what music I’d brought with me for him to listen to,” recalls Garland. “So I produced a copy of Enter the Fire, which Jason featured on quite heavily, and was just about to put it on the player when Joe’s phone rang. It was Billy Childs, a great piano player who’d played with Freddie Hubbard and was Herbie Hancock’s dep in Headhunters. Billy was in New York and ten minutes away from Joe’s place. Joe invited him round and when Billy heard Enter the Fire he was very flattering about my saxophone playing.”

Childs asked Garland if he had another copy of the album because there was somebody else he wanted to play it to. So Garland gave him a CD, not knowing that this “somebody else” was Chick Corea.

“Chick later told me that Billy never, ever gave him music he wanted him to check out and that’s what made him listen to Enter the Fire,” says Garland. “You can imagine how many CDs Chick gets given – everybody wants him to hear what they’re doing – and the funny thing is, I hadn’t even taken off my coat in Joe’s place, I hadn’t had a chance, when that connection was made.”

The invitation to work with Corea didn’t arrive with quite the same speed, although it didn’t lack urgency. It was a year after the encounter with Billy Childs that Garland got a call to say that Corea’s current saxophonist, Bob Shepherd had had to drop out of a European tour that was due to begin in four days. Could he step in?

“I dropped everything and joined Chick’s band Origin with practically no rehearsals for a month on the road. A different airport every day, real in at the deep end stuff, but a fantastic experience,” says Garland.

It was the beginning of a relationship that lasted through four or five different Corea bands and projects, including Garland’s orchestration of five of Corea’s compositions for the Sydney Symphony Orchestra and winning a Grammy for his part in creating The New Crystal Silence album, which celebrated Corea’s partnership with vibes master Gary Burton.

“I think one of the reasons Chick and I got on so well is that he loves composition and composers,” says Garland. “When you play jazz and when you’re a touring musician, all sorts of things go on and I never got involved in any of these all sorts of things. I spent a lot of my time on the road composing and since working with Chick wasn’t a full-time job – because he’s off doing other gigs and projects – I was able to do my own stuff for the Northern Sinfonia or work with Bill Bruford’s band and Storms/Nocturnes with Joe Locke. So I’d spend all my free time working on scores, probably being a bit geeky about all that, but it served me well.”

Working with Corea, as had been the case when he joined Ronnie Scott’s band at 23, took Garland back through jazz history. As well as keeping up with developments in electric jazz, Corea can just as easily connect with pianists including Art Tatum and Thelonious Monk. Plus he’d played with Miles Davis and Stan Getz.

“I’d come into jazz via prog rock and the ECM label, so working with Ronnie and Chick gave me a fascinating insight into jazz’s development,” says Garland. “At the same time, listening to Ralph Towner playing 12 string guitar or Dick Gaughan singing the Snows They Melt the Soonest or contemporary classical composers, and even Jethro Tull, showed me that it was possible to suggest a sense of place in music that’s closer to where I come from. Then I heard [British saxophonist] Tony Coe improvising on a folksong melody and realised that this sense of place could be translated into jazz.”

The Weather Walker album gathered together his experience what Garland calls of this “other” music. It evokes the Lake District and the pastoral settings that have informed his work since the early Lammas recordings and continue to be an inspiration.

“We obviously can’t cover the orchestrated sections but we can imply some of those passages,” he says. “Besides, between us we have no shortage of compositions, so we’ll bring in some of Jason’s music and feature Yuri’s fantastic playing. Ultimately, it’s just great to be going out and making music with people who are so compatible. I love the camaraderie that you get in that situation and it makes you really want to play.”