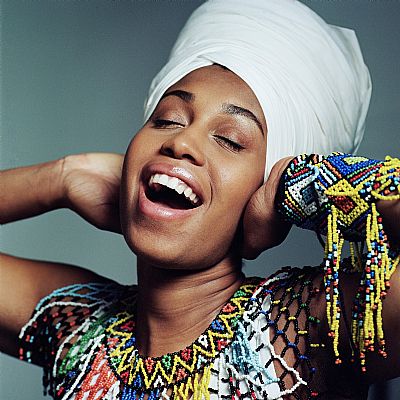 Jazzmeia Horn is talking about the need to tell the truth when she sings. The Dallas, Texas-born winner of the ultra-prestigious Thelonious Monk International Jazz Competition, which propelled Horn towards a Grammy-nominated debut album in 2017, has just enjoyed a rare lie-in.

The night before we speak, she had a few glasses of wine on her first night off in months and this has given her the perfect illustration for her most important song-choosing criterion.

“I have to be able to relate to a lyric and make the listener believe that I actually wrote these words,” she says down the line from New York as she looks forward to her first trip to Scotland next weekend to play three concerts with the Scottish National Jazz Orchestra. “For instance, I never sing Fly Me to the Moon because I don’t want to go to the moon. I know that’s not what the song’s really about but it just wouldn’t ring true for me.”

Billy Strayhorn’s standard, Lush Life, on the other hand is a song she didn’t touch until she was twenty-four.

“I had no experience of what the lush life was like before then,“ she says, adding mischievously that she does now. “I didn’t drink alcohol when I was at college. I tried it, because all my friends were drinking and smoking, I but didn’t like the taste. So I wasn’t going to sing about something I didn’t know anything about. I can sing the hell out of it now but for me singing is all about storytelling and it’s got to be real. It’s not like musical theatre or opera – and I love these art forms - where you might have to get into character. It’s about being honest and convincing.”

Horn always knew she was going to sing. Her jazz-loving grandmother, to whose memory she dedicates her recently released second album, Love and Liberation, and who gave Jazzmeia her name, was the pianist in the Southern Baptist church the family attended and she used to encourage the young Jazzmeia to sing with her when she played at home.

Jazzmeia sang in church, too, although it wasn’t always her singing that got peoples’ attention.

“My mother was frightened of little animals, like frogs and squirrels, but I loved these creatures,” she says. “I think I was destined to become a vet because I was always catching frogs and smuggling them into my purse. In church there’d be these silences during prayers and all you’d hear was this ‘ribbit, ribbit’ – and my mother always knew exactly where that frog noise was coming from. She’d let me know quietly but in no uncertain terms what I had to do.”

It was at high school that Horn began to take the serious route to singing professionally. She attended Booker T Washington High School for Performing and Visual Arts in Dallas, known for such illustrious former students as singers Norah Jones and Erykah Badu and the great, prematurely lost trumpeter Roy Hargrove. With her grandmother’s encouragement, Horn found the mentors who would guide her passion for jazz, including Sarah Vaughan, Abbey Lincoln, Betty Carter, and Bobby McFerrin.

“I took something from everybody,” she says. “I knew I needed a repertoire of skills and approaches and in Sarah Vaughan I could hear someone who was sassy but always 100% involved in the story she was telling. Abbey Lincoln was a very versatile, very accomplished woman, a singer, an actress, a seamstress and just a great example to follow, and from Betty Carter, whose absolute enthusiasm for what she was doing I loved, I learned how to be firm with a band. As for Bobby McFerrin, he’s the complete vocalist. The control he has of his instrument is amazing, a real inspiration.”

Her success, in 2015, in the Thelonious Monk International Jazz Competition, whose previous winners include singer Cecile McLorin Salvant, trumpeter Ambrose Akinmusire and pianist Tigran Hamasyan and where among the judges she had to impress were Dee Dee Bridgewater and Al Jarreau, led to Horn signing with Prestige Records as part of her prize.

Her debut for the label, A Social Call, earned a Grammy nomination, something that, two years on, she still sounds overwhelmed by.

“In the liner notes to my second album, I say that I didn’t ever expect to be the person I am today and that’s because the first record I put out got me nominated for a Grammy and that opened the door for me to perform at the Grammy awards,” she says. “I mean, I used to dream about singing at the Grammys but I never actually thought I’d be doing that, and to get there with the first-ever recording I released is pretty freakin’ awesome. To this day I can hardly believe that happened.”

The recognition of a Grammy nomination has, in its own way, ensured that Horn won’t rest on her laurels. Not that she was going to anyway. She sounds driven, while still being relaxed and affable, and while A Social Call featured mostly familiar songs, the follow-up, Love and Liberation, for the Concord Jazz label, underlines its credentials as a personal statement by focusing largely on Horn’s own songs.

“I write all the time,” she says. “I have two journals – one for ideas for lyrics, the other for melodies – and I always carry my mini recorder everywhere. And in writing songs I follow the same criteria as for choosing songs. Be honest, be yourself and don’t lie because if you tell one lie, you have to tell another, and another.”

There’s a similar aspect to her scatting – improvised wordless soloing – which she loves to do.

“I love language and languages. I speak six languages but the thing about scatting, having no words to follow, you can say what you want to say, or how you feel in that exact moment, with a sound. It’s so expressive and people everywhere – and I’ve sung in Japan, Korea, places I never thought I’d visit and where I didn’t even realize they appreciated jazz – they understand what you’re telling them with those sounds.”

For her concerts with the Scottish National Jazz Orchestra, she’ll be singing some of her own songs and some jazz standards. She thinks. She’s sent some music over for the orchestra’s arrangers to work on and is trusting the director, Tommy Smith, to present her as she would hope to be presented. She needn’t worry. A man who readily admits he’s not easily impressed by singers, Smith heard Horn singing at Rochester Jazz Festival in New York and was so knocked out that he went up to her afterwards and bought her CD, and then asked the festival for her agent’s details.

“I’ve heard some recordings of the orchestra but I’m looking forward to hearing them in the flesh,” she says. “I love working with big bands. I’ve sung with the Metropole Orkest in the Netherlands and the WDR Big Band in Germany and even some symphony orchestras, and it’s great to be wrapped up in that big sound. It’s a completely different energy from a trio or quintet. Plus, big bands are usually mostly men and it’s great to be in a situation where men can work together without fighting. At least most of the time!”