Daniel Martinez - the real flamenco company, made in Scotland 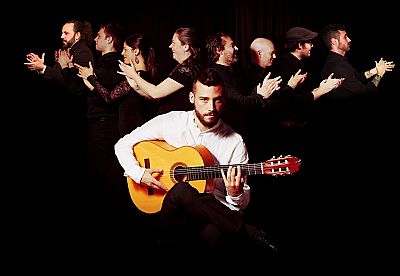 Walking through the streets of Edinburgh in January, Daniel Martinez can understand why his family back home in Cordoba might think he’s a little mad. Having left Spain for Scotland on a whim, the flamenco guitarist who brings his Herald Angel-winning production, Art of Believing to Glasgow Royal Concert Hall this Friday has thought he was a little mad himself on occasion.

The Art of Believing ethos is to follow your dream, however, and while he might well have achieved his ambition of forming his own flamenco company and presenting his own music back home in the cradle of flamenco, Martinez’s leap of faith in choosing to live in Edinburgh has certainly paid off.

“My family in Cordoba have always supported and encouraged me and that means everything to me,” he says. “They could have told me to think about becoming an architect or following some other profession, but they understood that music was my passion. And then, I happened to find another family in Scotland and they mean everything to me, too.”

In 2015, Martinez was preparing to sit his final exam as a guitarist at the conservatoire in Cordoba when a friend invited him to London to play in a charity concert. Also appearing on this concert were the singers Inma Montero and Danielo Olivera. The latter has lived in Edinburgh for seventeen years now and happened to mention the Fringe. Martinez was at a loose end. His final exam was due to take place in September. He could prepare for it anywhere, so he set off for Edinburgh and three weeks of mayhem, performing and discovering the local Spanish community.

At the end of the Fringe, he returned to Cordoba, passed his exam with flying colours and thought, what next?

“I realised it would be difficult to begin earning a living in Edinburgh but I now knew some people and I had a good feeling about moving here,” he says. “Of course I think I’m mad when it’s freezing here and it’s very mild, to say the least, when I speak to my mother in Cordoba but it’s amazing how quickly you adjust to things like that, and when you have good things happening with your music, these things actually aren’t so important.”

Martinez was, it seems, destined to become a musician. His older brothers play the double bass and the euphonium and his father plays guitar, although not professionally.

“My father’s brother is a professional guitarist. He also teaches at the conservatoire, and when we had parties at home, my father and my uncle would always play guitar,” he says. “I was fascinated by what they were doing from an early age but in Cordoba, you have to be seven years old before you can begin formal guitar studies. So I waited. They could see that I was interested and when I was seven I started learning to play.”

In the home of flamenco, learning to play guitar is a serious business. So began a regime of study that would continue until Martinez was eighteen, spending four hours at the conservatoire three days a week to begin with while also going to school and keeping up with his homework.

“There’s more to playing flamenco guitar than just learning to play the instrument,” he says. “You have to study accompaniment – working with singers and dancers – and you have to understand all the rhythms that are involved, and you do that by clapping. Clapping is a big part of flamenco and when you accompany a singer or a dancer, you have to learn what is effectively another language for each art form. It’s intense but I really enjoyed it and actually, to this day, I play the guitar for relaxation, even though it’s my job. Around eleven o’clock at night, if I’m at home, that’s my special time when I pick up the guitar and just play for me.”

As well as keeping up his school work, through the later stages of the studies that prepared him for the degree course that would allow him to qualify as a fully licensed musician, Martinez worked in the local tablaos, the venues where flamenco is performed. He also began writing his own music.

“A friend, another guitarist, had gigs all over town and he was struggling to keep up, so he asked me to deputise for him, here, there and everywhere,” he says. “It was fantastic experience, a great introduction to the life of a professional guitar player in the flamenco world and the great thing about accompanying dancers is that you improvise to fit what they’re doing and from these improvisations you can develop your own compositions.”

The ideas he began storing up then would feed into Art of Believing when, having arrived in Edinburgh and worked initially by giving guitar lessons and accompanying dancing at the local flamenco classes, he formed the Daniel Martinez Flamenco Company.

“It had been my ambition since, I don’t know, probably when I started accompanying singers and dancers in Cordoba,” he says. “By this time, I had met Gabriela [Pouso, his partner, manager and the company’s dancer] who was already living here, and I already knew Inma [Montero] and Danny [Olivera]. So it was almost a ready-made company. Through teaching guitar I had lined up the supporting guitarists, Stuart Caven and Gregor Gilchrist, who work incredibly hard, and invited them to join.”

Running a flamenco company, as he soon discovered, involves more than organising the music. Feeling that he had to get the musical ideas that had been accumulating out onto the stage, he devised Art of Believing. It’s first performance was a massive learning curve.

“I really wanted to perform it in a proper theatre, so we hired the Lyceum in Edinburgh and promoted the show ourselves,” he says, adding one of many entirely authentic “mamma mias”. Poster and leaflet printing and distribution, advertising – “they didn’t teach us any of this at the conservatoire in Cordoba” – and the all-important box office reports became part of his and Gabriela’s daily routine as they put everything into making Art of Believing a success.

Come the Sunday night in October, 2017, when the show made its debut, the company played to a full house and left the stage to a standing ovation.

“That was amazing,” says Martinez. “All we could see was a sea of faces, all smiling. So we decided to take the show to Birmingham. I don’t know why. But we had the same result. And the same thing happened when we took it to Brighton.”

Now, having added successes in London and Cardiff and at arts festivals including the Ludlow Fringe Festival, Martinez is looking forward to playing in Glasgow and Manchester while thinking ahead to the show’s successor.

“I have a lot of ideas and having great people to work with, I’m sure we can produce another show that people will want to come out and see,” he says. “When you’re standing outside a theatre handing out flyers for your show, you think, why am I doing this DIY promotion? And then, the day of the performance comes and – hopefully – the people come and enjoy it, and you think, that’s the art of believing. If you have a dream, you can make it come true.”

For more information about Daniel, visit his website here