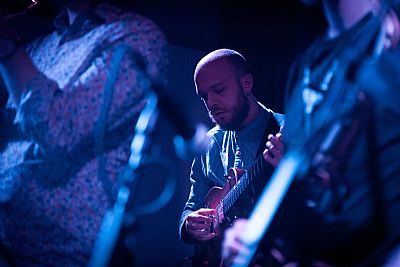 When guitarist Tom Stephenson’s trio released their first album, Perfect Circle, at the beginning of April, they had mixed feelings about it.

The possibility of hearing their music on the radio excited them. On the other hand, they were slightly wary about what reviewers might make of the third album release in as many months by students and former students of the jazz course at the Royal Conservatoire of Scotland in Glasgow.

Pianist Fergus McCreadie had launched his second album, Cairn, and saxophonist Matt Carmichael his first, Where Will the River Flow, to five-star reviews in prestigious publications such as Mojo and BBC Music Magazine.

Tom, aware of the star quality and attention that McCreadie and Carmichael had garnered through their student years, thought Perfect Circle might suffer by comparison.

He need not have worried. The influential website London Jazz News and BBC Radio Scotland’s popular Jazz Nights programme were quick to praise Tom’s compositions and the trio’s musicianship and radio presenters from Canada to Italy have turned the opening track, The Sun’s Hat into something of a minor turntable hit.

The strong rhythmic pulse that is a feature of Perfect Circle has a Courier heartland connection. Drummer Greg Irons grew up in St Michaels where he was encouraged to take an interest in music generally and jazz in particular by his parents. His dad, Kenny is a bass player who has gigged across Scotland for over thirty years and his mum, Ruth for some years organised and administrated the jazz school run by long-time Fife Youth Jazz Orchestra director Richard Michael.

Father and son actually formed the rhythm section on occasion for the Sunday afternoon jazz sessions run by guitarist Kevin Murray in Clarks Bar in Lindsay Street before Greg went off to study at the conservatoire in Glasgow.

“My dad used to play me these albums that had great drumming on them and it turned out that he’d seen the musicians involved in Dundee,” says Greg. “There seems to have been a time around the 1980s when not just great drummers like Billy Cobham and Alphonse Mouzon but top guitarists like Mike Stern played concerts in Dundee. Obviously I missed out on that but hearing about it was exciting and probably contributed towards me wanting to become a musician.”

Tom’s back story is different. He was going nowhere at school in his hometown, Darlington, and becoming quite disillusioned with academic expectations when a friend suggested he should take up the guitar.

“I immediately felt a new sense of purpose,” he says. “At first I listened to blues records and players such as Jimi Hendrix and Stevie Ray Vaughan. Within a relatively short time, however, I was dedicating myself to learning a broad range of musical styles.”

This can be heard on Perfect Circle where country, rock and gospel music influences blend in with the trio’s essential jazz qualities.

In 2015 Tom was awarded a scholarship to study on the jazz course at the Royal Conservatoire of Scotland under the direction of saxophonist Tommy Smith. During his time at the conservatoire Tom established himself on the Glasgow jazz scene and went on to play with established names including trombonist Mark Nightingale, trumpeter John Faddis and the aforementioned guitarist Mike Stern.

It was while they were all at the conservatoire that Tom teamed up with Greg and bassist Mark Hendry. Mark is also a composer and bandleader in his own right, having presented a commission for a twenty-piece orchestra at Edinburgh Jazz Festival while a student.

The trio has gigged substantially, including appearances at Edinburgh and Glasgow jazz festivals, allowing Tom’s compositions to strengthen and develop.

“Each tune on Perfect Circle was written towards the end of my studies at the conservatoire,” says Tom. “My goals were to express myself in an uncontrived manner and get in touch with what excites me about music on a personal level.”

Simplicity and directness are key for Tom, who is keen to play live with the trio in support of Perfect Circle as soon as music venues re-open.

“We haven’t played in Dundee yet,” he says, “but hearing about these concerts Greg mentions from the 1980s, it would be great to be part of that tradition.”