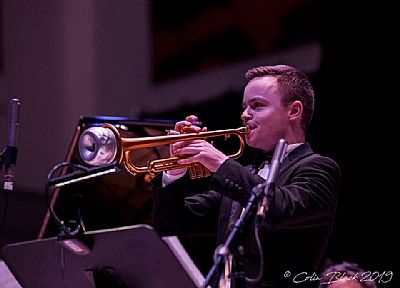 Sean Gibbs turned memories of a childhood treat into inspiration for his latest single. The London-based trumpeter remembered visits to Camperdown Park with his maternal grandparents as an idea for a tune came to him. He tried to recapture the feeling his younger self experienced as he ran to the play park in Camperdown and the single was born.

“It’s really about recalling the spirit of childhood and the sense that you’re carefree at that age,” says Sean, now twenty-eight, who grew up in Edinburgh. “My twin sister, my brother and I always looked forward to coming through to Dundee to see our grandparents during the school holidays, at first when they lived in Menzieshill and then in Lochee. Both of these places are quite handy for Camperdown and it was always a highlight of the visit when they said, Let’s go to the park.”

Sean remembers the zoo and the pitch ‘n’ putt in Camperdown with similar fondness. It was only later that he learned that the Camperdown name had historical significance.

“I don’t think we were ever told as children about Admiral Duncan or him winning a significant sea battle with the Dutch,” says Sean. “We would probably have been much more interested in getting into that big open space than finding out that it was named after a place called Kamperduin in North Holland. The history doesn’t really have any bearing on the tune but it’s interesting background information.”

One other aspect of visiting his grandparents that has stayed with Sean was their means of keeping in touch with events back in their home country.

“They moved to Dundee from Ukraine after the Second World War and I remember they had this enormous satellite dish so that they could pick up Ukrainian TV,” he says. “Satellite dishes were a novelty at the time, so it would have been pretty prominent anyway, but this one was like GCHQ, or so it seemed. It was certainly effective and it enabled my grandparents to watch Ukrainian cultural programmes and things like that.”

Ukrainian music didn’t make much impression on Sean, although it’s something he might research a bit more. He began playing trumpet at school and by his early teens he was featuring in youth orchestras.  After being spotted by saxophonist Tommy Smith he was invited to join the Tommy Smith Youth Jazz Orchestra where he gained valuable experience, not only playing regular concerts but also featuring on the orchestra’s Emergence and Effervescence albums. He also played with the National Youth Jazz Orchestra of Scotland before going on to study on the jazz course at Birmingham Conservatoire in 2011.

“Birmingham was great for getting a chance to work with top visiting musicians,” he says. “The bass player Dave Holland, who comes from Wolverhampton but ended up playing with Miles Davis, has close ties to the Conservatoire, so he would be around and David Bowie’s latter-day collaborator, composer-arranger Maria Schneider, saxophonists Kenny Garrett and Joe Lovano and pianist John Taylor came to do workshops and master classes.”

While in Birmingham Sean also won acclaim for his big band album Burns, featuring original compositions inspired by the poetry of Robert Burns and recorded by the Birmingham Jazz Orchestra. He graduated from the Conservatoire with first class honours and the BMus Jazz Prize in 2015 and moved to London in 2017. As well as keeping busy as a session musician there, when the Covid pandemic permits, he is a member of the Scottish National Jazz Orchestra and the rock-influenced brass band Young Pilgrims.

Camperdown is taken from his debut album for the prominent Ubuntu label, When Can I See You Again? which explores the human connections that we often take for granted.

“It was something I started to give me something to work towards during the pandemic,” he says. “It features some of my favourite musicians, saxophonist Riley Stone-Lonergan, pianist Rob Brockway, drummer Jay Davis and my Scottish National Jazz Orchestra colleague, bassist Calum Gourlay, and although the music was written for a quintet there might be potential for expansion. Some of my Burns tunes have been played by the Tommy Smith Youth Jazz Orchestra and one was picked up by the University of Miami’s Frost Studio Jazz Band. So we might see Camperdown orchestrated yet."