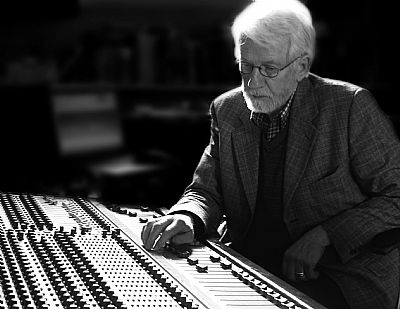 Robin Morton, who has died suddenly at the age of eighty-one, was a figure of enormous influence and inspiration in folk and traditional music in Scotland, Ireland and across the world.

A founding member of one long-running group, the Boys of the Lough, he went on to manage and guide another, Battlefield Band, to international success, and as a record producer and label owner he oversaw both the 1979 Melody Maker Folk Album of the Year by Cilla Fisher & Artie Trezise and Dick Gaughan’s classic A Handful of Earth album. He also recorded Scottish harp music and Gaelic singing long before these became a commonplace part of the Scottish music scene.

Morton’s love of traditional music actually developed through his teenage fascination for jazz, which he maintained to the end, and it’s a tantalising thought that his Temple Records label might have added a live album by the tenor saxophone legend George Coleman to its rich catalogue of Scottish and Irish music. Until recently, Robin and his wife, the internationally renowned harper and glass artist, Alison Kinnaird kept an apartment in New York. Coleman was a neighbour and Robin talked often of capturing one of the ageing saxophonist’s gigs for posterity.

It was Robin’s father who turned him onto jazz at home in Portadown. Robin took up the cornet in an attempt to emulate Louis Armstrong (he’d been disappointed to learn that Jelly Roll Morton wasn’t actually called Morton and so wasn’t related) and he discovered later that he bought records in the same specialist jazz and blues shop in Belfast that Van Morrison frequented. Seeking other authentic forms of music, Robin discovered blues through the 1950s skiffle boom and then realised that the roots of the Appalachian folk songs that skiffle had also led to him lay in Scotland and Ireland.

On leaving school, Robin taught mentally handicapped children, training in Manchester, where he met and befriended the Spinners folk group and bought his first guitar. Back in Portadown, he discovered that his family, particularly his maternal uncle, Tom McCreery, had been interested in traditional songs all along. McCreery suggested that Robin go to the singing session at the Head of the Road pub, about ten miles out of town, and Robin’s appetite for song collecting was whetted.

In 1962, Robin began studying for a degree in Social Work at Queen’s University in Belfast where he attended folk clubs and became involved in the Glee Club, which was run by Phil Coulter, who later became a hugely successful songwriter. With some fellow students, Robin formed a folk music society, where he quickly developed his organisational skills. After a year he moved to London to study at the LSE and during this time he fell in with Ewan MacColl, who encouraged Robin’s musical interests and give him access to a vast collection of songs.

By now a qualified psychiatric social worker, Robin returned to Belfast. The university folk club was still going strong and Robin sang and organised concerts there before joining with other singers and musicians to form the Ulster Folk Music Society. Robin’s aim was to integrate songs and tunes, which thrived in separate sessions at the time, a sense of things to come. He also used his time in hospital following a rugby injury to begin collecting songs from fellow patients, one of whom bashfully sang into Robin’s tape recorder from behind the privacy screen.

Among the musicians who appeared for the Ulster Folk Music Society were a fiddler, Tommy Gunn and a whistle and flute virtuoso, Cathal McConnell. Robin began playing guitar, bodhran and concertina with them and in 1967, another pair of UFMS guests, Ewan MacColl & Peggy Seeger, for whom Robin had organised tours, invited them to tour England and Scotland. Gunn, McConnell and Morton became the first edition of the Boys of the Lough, named spontaneously after a reel they played.

At this point Robin decided to study for another degree, in Economic History, at Queen’s University. He paid his way through the course by doing freelance radio journalism, selling one version of a story to the BBC and another – as Robert Martin – to RTE. An old school friend, Gloria Hunniford sometimes took a third version for the BBC World Service. Cathal McConnell heard “Robert Martin” on the radio one day and told Robin that there was a chap on RTE who sounded just like him.

In 1970, Robin came to Edinburgh to study for a PhD, focusing on the treatment of madness. Before he left Belfast he published a book of the songs he’d collected, Folksongs Sung in Ulster and had begun producing records, although his pioneering enthusiasm for real-deal traditional music wasn’t always shared by record companies. His PhD was never finished due to his musical interests eating into study time. Tommy Gunn retired from the Boys of the Lough and Robin and Cathal invited Shetland fiddler Aly Bain and his then duo partner, guitarist, harmonica player and singer Mike Whellans, who was later replaced by Dick Gaughan, to form a quartet.

With Robin’s organisational skills, promotional flair and ability to make contacts, the group forged an international touring network, taking the traditional music of Ireland, Shetland and Scotland to huge audiences in the U.S. especially. Throughout the 1970s Robin was the Boys’ player-manager, somehow finding the time to turn an old church in Temple, Midlothian into a family home for Alison and their children.

It remained the family home and added another function – a recording studio and base for Temple Records – when Robin came off the road and turned his attention to recording music he felt was being neglected. He recorded Cilla Fisher & Artie Trezise and Dick Gaughan for leading folk label Topic Records and when Topic didn’t share his enthusiasm for Scottish harp music and Gaelic singing, Robin released his wife, Alison Kinnaird’s The Harp Key and albums by singers Flora MacNeil and Christine Primrose on Temple Records. More, including the revered first album by Edinburgh-based Jock Tamson’s Bairns, followed.

Among Robin’s production clients were Battlefield Band, whose overtures for him to manage them he initially declined but whom, from 1980, he went on to champion and guide with typical Robin-esque gusto from a folk club attraction to concert hall and festival stalwarts. He gave their music the strapline “Forward with Scotland’s Past” and established them internationally, keeping the band thriving through numerous personnel changes for forty years. His skills as an advocate for traditional music and music in general saw him spend a period as chairman of the Scottish Record Industry Association and from 1986 to 1988 he was director of Edinburgh Folk Festival.

As well as a house, studio and office, the old church in Temple also served as an exhibition venue for Alison’s glass work and Robin would share his pride in Alison’s creativity – and inevitably, a few stories – with visitors. He had an endless supply of anecdotes, often referencing well-known personalities who were long-standing friends. It’s not difficult to imagine how he accumulated these friends because Robin was a man whose enthusiasm for everything he embraced was only exceeded by his incredible energy and desire to get things done.

At the time of his death Robin was in the process of finishing another project, a collection of songs from Ulster that is just a couple of notes short of completion. Plans are afoot to see it through to publication, one more achievement completed by a man who achieved - and gave – so much. He’ll be missed immeasurably by Alison, his daughter, Ellen and son, John and by everyone who fell under his charms.