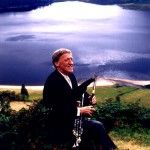 Paddy Moloney, who has died aged eighty-three, was a master musician of enormous influence. As the leader of the Chieftains he took Irish music around the world and involved the band in collaborations with musicians including Van Morrison, the Rolling Stones, Dolly Parton and Ry Cooder.

With Moloney at the helm, the Chieftains became official musical ambassadors for Ireland. They were one of the first Western groups to visit China, and the first Western group to play on the Great Wall of China, after the Chinese Embassy in London took a box at the Royal Albert Hall for the Sense of Ireland festival in 1980. The diplomats enjoyed the Chieftains’ performance so much that they invited them to China, and Moloney, ever alert to an opportunity, followed it up.

Moloney was born into a musical family in Dublin. His father played the pipes and his mother sang and played the accordion. His maternal grandfather played the flute and his uncle Stephen was an all-Ireland champion piper. One of the first songs Moloney remembered hearing was The Little Maid from Malabar, sung by his grandmother at one the family’s regular parties in County Laois that went on all night. Retitled The Coast of Malabar, the song went on to feature on the Chieftains’ Long Black Veil album with Ry Cooder.

One of Moloney’s big treats as a child was to turn the handle on his dad’s wind-up gramophone that played 78 rpm recordings of piping soloists and singers including John McCormack. He and his sister Sheila used to lie in their beds and listen to the RTE ceili band programme coming from downstairs and it wasn’t long before Moloney himself was playing music.

After much pleading, his mother relented and let the four-year-old try her melodeon and almost immediately he was playing recognisable melodies. Not long afterwards she bought him a tin whistle. At a time when playing a traditional musical instrument would attract mockery, the diminutive Moloney used his quickly developed talent on the whistle to fend off school bullies. A fellow pupil, Leon Rowsome befriended Moloney and on discovering that his new chum’s dad was the King of the Pipers, Leo Rowsome, that the family listened to on RTE every week, Moloney persuaded his parents to somehow scrape together enough money to buy a set of practice uilleann pipes and let him take lessons with Rowsome senior.

Moloney quickly became Rowsome’s star pupil and at the age of nine he played his first concert, in Phoenix Park, Dublin, where the Chieftains later played for Pope John Paul ll in front of a million people. Entering his first competition around the same time, Moloney came fourth and, horrified, he began practising even harder. He was still in short trousers when he joined in sessions with master pipers including Seamus Ennis and Willie Clancy, earning their approval and encouragement, and having earned an ovation with his rendition of O Carolan’s Concerto, a Chieftains favourite-to-be, at the Dublin College of Music’s annual concert, he made his first radio broadcast aged fourteen. The audience response was such that his slot was repeated for fourteen weeks straight.

With no thoughts of playing music as anything other than a hobby, Moloney left school at sixteen and got a job as a junior accountant and bookkeeper with a builders’ supply company. He went to night school to study accountancy but this soon suffered as Moloney was playing music at every opportunity with his own group, including future Chieftain Michael Tubridy, and various ceili bands. He also had a skiffle group, in which he played washboard and ukulele, and took part in competitions, eventually retiring from these at the grand old age of eighteen, having won four all-Ireland medals.

Moloney and O Riada became friends and when O Riada recruited traditional musicians for an orchestra, Moloney, a born leader and shop steward, became known among his colleagues as The Napoleon of Ceoltoiri Cualann. The group went on to record the music for the film version of The Playboy of the Western World and included tin whistle virtuoso Sean Potts.

Potts had also been in what Moloney regarded as the first edition of the Chieftains in the late 1950s and when Garech Browne offered Moloney a chance to record for Claddagh in 1963 the result was the first Chieftains album, with Michael Tubridy (flute, concertina, tin whistle), David Fallon (bodhran) and Martin Fay (fiddle) joining Moloney and Potts.

All the musicians still had full-time jobs – before he joined Claddagh as managing director, Moloney regularly left his desk at Baxendales’ Builders Suppliers to “buy stationery” when he was off to play a session for RTE – and did so until the 1970s. At that point, a groundswell of support, and Radio 1 DJ John Peel’s enthusiastic advocacy, led to the band signing with Island Records. Island re-released their first four albums, which opened up the U.S. and their work on the Stanley Kubrick film Barry Lyndon, including their heart-stopping version of O Riada’s Women of Ireland, took them into the mainstream.

By the 1980s the Chieftains were a major concert attraction across the world and admired by musicians including Bob Dylan, Paul McCartney and Kate Bush. Moloney played on sessions for Sting, Stevie Wonder, Mike Oldfield and even The Muppets and he was always keen to add illustrious guests to the Chieftains’ albums. In 1988 they recorded Irish Heartbeat with Van Morrison, going on to tour the album with Morrison, and further film work included The Grey Fox, Far and Away, with John Williams, and Gangs of New York.

The seemingly tireless Moloney was a dependably enthusiastic master of ceremonies, always ensuring long-time Chieftains, including flautist Matt Molloy and singer-bodhran player Kevin Conneff, were featured and invariably introducing dancers such as Cara Butler and Tara Breen and in recent years, the Isle of Lewis-born singer Alyth McCormack.

In an online tribute, Donald Shaw, creative producer of Celtic Connections, where the Chieftains were regular visitors, remembered Moloney’s response to his last invitation to appear: “if you can get us an orchestra and a pipe band - we’ll be there.”  A show of enthusiasm and liking for a grand occasion that summed up Moloney perfectly.