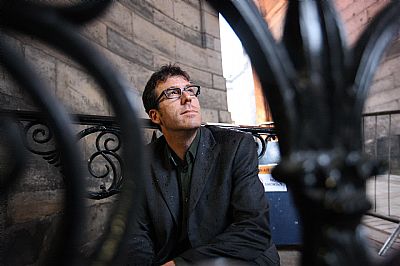 Louis Durra is talking about the first gig on his upcoming tour of Scotland and anticipating walking into the Jazz Bar in Edinburgh and not seeing Bill Kyle. Kyle, who died suddenly at the end of last month, welcomed the then California-based pianist as a Fringe performer in 2011 as well as on subsequent visits and although theirs was a business arrangement, Durra appreciated what Kyle was doing for the local and national music scenes.

“Not having him there is going to feel strange,” says Durra down the line from his current home in Berlin. “It’s so important for musicians to have a place where they can play and develop their craft and the idea that someone can provide that platform night after night, year after year is deeply impressive.”

In the Jazz Bar, Kyle gave Durra a fully equipped stage in a new market on which to continue his search into pop, folk and electronica for material that would create good jazz. Musicians have been playing and transforming the popular music of the day since jazz began and it’s no novelty now to hear jazz versions of Radiohead or Pharrell Williams songs, for example. Durra dug a little deeper, however, turning KT Tunstall, Gillian Welch and Boards of Canada into song sources.

“That’s still going on,” says Durra, who had a ready-made jazz response to Bob Dylan’s recent Nobel Prize for Literature award in his downright groovy take on Dylan’s Tangled up in Blue. “I love the standard jazz repertoire but among people who play the old songs the music, for me, is stiffening. You can hear bands from almost anywhere in the world playing It Could Happen to You, say, and you can almost predict what key it’ll be in and what tempo it’ll be played at based on someone’s ‘definitive’ version from a 1950s recording.”

This, he argues, is hardly in keeping with a music form that previously travelled from Dixieland to Miles Davis’ ground-breaking Bitches Brew in the space of fifty years.

In Berlin, where he moved following a stopover on his way home to Los Angeles from Edinburgh, Durra keeps his ears open for new material but he has also become increasingly interested in the possibilities of playing solo piano. As an experienced record producer as well as a performer, he can also electronically manipulate recordings of his solo improvisations and he is happy with the results.

“From a musical standpoint, I’d probably have to say that Berlin’s been disappointing,” he says. “I couldn’t find compatible players to make up the kind of trio I wanted to work in, which is why I got into playing solo. On the other hand, though, socially I enjoy it here. I’ve made friends with quite a few refugees. I’ve been over to Calais and visited the Jungle there twice and you begin to see that there are an awful lot of people whose lives are affected by the fact that they were born somewhere, or have had to move somewhere, that doesn’t want them. The effect that spending time with these people has had on me as a musician is that it makes me more content to follow my own taste. You don’t need to be part of a particular school or movement. It’s okay to be you.”

At one point Durra, whose Fringe performances earned him a Herald Angel award in 2011, was planning on moving to Paris. He still might do so as the French capital offers a receptive music scene for jazz players – and has done for decades – but as a temporary visa holder he’s waiting until his status becomes clearer before deciding.

“Moving to Europe hasn’t been as straightforward as it appeared to be when I took advantage of that stopover in Berlin and thought, well, this seems like a really vibrant place to be,” he says. “I don’t regret moving though because in the end, it’s people you connect with rather than places and no matter where you are there’ll be downsides as well as benefits.”

On his Scottish dates this week Durra will be accompanied by two musicians he connected with during his Jazz Bar residencies, bassist Euan Burton and drummer Doug Hough.

“I’ve played with Doug quite a lot and I like the musicality he brings to a trio and although I’ve only played with Euan a couple of times, I’m familiar with some, if not all of his music,” says Durra. “He does a lot of different things and it’s hard to keep track but I’ve been really impressed with his own quartet and those recordings he made with another pianist, Tom Gibbs. So it’ll be good to get a chance to do more work with him.”

Louis Durra - the sound of surprise

When Louis Durra ponders the unlikely tale of his success – at fifty-one – in becoming a top five hit on American college radio and exclaims, “how did that happen?”, it’s tempting to reply, “Well, it’s not rocket science.”

But it is rocket science or rather Rocket Science, the new album that’s maintaining this pianist’s current position at the centre of attention after years as sideman, providing support to an endless line of singers and working in situations ranging from children’s theatre to biker bars.

The possibility that Durra could take the jazz piano trio to a wider, younger audience was there for all to hear when he settled into the Jazz Bar in Edinburgh last August for a Fringe residency that saw him earning four and five-star reviews and resulted in him returning to Los Angeles with a Herald Angel – this newspaper’s equivalent of the Oscars during festival-time in Edinburgh – in his luggage.

As much as Durra talks about music talking to him when he hears songs he might like to interpret, his own playing during that Fringe run communicated very directly and often very subtly with his listeners. People would leave the Jazz Bar with Durra’s superbly individual take on Bob Dylan’s Tangled up in Blue or KT Tunstall’s Black Horse and the Cherry Tree still playing in their heads.

How did he know he was getting through to his audiences on those afternoons in the basement bar on Chambers Street? Well, apart from their applause, there was the visitor’s book that he’d pass round, inviting comments.

“I’d been to the Fringe before, working with a play many years ago and then with a comedian in 2007,” says Durra. “And I’d quickly come to realise that the audiences were very sophisticated. The comments I got in the book confirmed this. They were very perceptive, the people had obviously been listening very closely and they would make suggestions about what we should play, some of which we actually took up. I’m very much of the mind that the musicians should pay attention to audience responses, watch how they react to a certain variation in melody or tempo or if I leave a space they might not have been expecting. So the performance becomes like a conversation, not just between the musicians but with the folks out there listening, too.”

Durra’s interest in jazz was piqued by hearing John Coltrane at the age of thirteen, and it wasn’t one of the saxophonist’s more accessible recordings either. It was later period Coltrane when his music was going further and further out in its explorations. An inveterate radio listener going back to pre-school days – a trait that makes his music being played across the US on hundreds of stations all the sweeter – he started turning the dial to as many jazz programmes as he could find.

Meanwhile, the classical piano lessons that he’d started a year or so earlier began to suffer at the hands, and fingers, of great jazz pianists such as McCoy Tyner and Bill Evans as Durra tried to emulate his new heroes. He was still in his teens when he got the opportunity that led to him becoming a professional musician, working in a theatre production. One job led to another and another and he became a pianist for hire, learning lessons along the way that have impacted on his own music.

“I got a huge amount out of working in theatre,” he says. “There’s music there that can convey a mood, move the narrative forward or set a scene or a time period. Then there’s timing: dramatic timing, comedic timing, audience timing, letting them respond to the action, even someone-walking-across-the-stage timing. And I’ve taken all of that into my own style in some way.”

Despite his assertion that he’s played certain songs so often, and not always in the best situations, that he never wants to play them again, he’s puzzled by fellow musicians who treat singers disdainfully.

“If you really listen to a song, vocalists will choose strange notes once in a while, slide into or out of notes that ‘don't belong’ in the original melody,” he says. “I got onto this idea: what if every note sung is meant to be there? What if the person singing is as much the composer as the songwriter? And it’s interesting: you can come up with an entirely new perspective on what a song can say instrumentally.”

After years of playing an accompanying role and having made a couple of jazz albums that didn’t go anywhere, Durra was given the chance to explore these thoughts and develop a more personal repertoire in a three-nights-a-week residency for a trio in a bar-restaurant in Los Angeles. Shortly before this, he’d lost interest in everything he’d been doing musically. He wanted to connect with the public and the best way to do this, he thought, was to play recent pop music, give the customers tunes they knew, but make it expressive and artistic. With four to five hours a night to fill and determined that he, his musicians and the bar staff alike wouldn’t get bored with the same songs being played on rotation, he worked up a repertoire of some two hundred items, ranging from jazz standards to songs by the Ting Tings, Radiohead and songwriter-rapper Ke$ha.

He calls the residency his “Hamburg basement” after the Beatles’ experience of honing their music in the clubs on the Reeperbahn, and the first sign that his approach was working came when the proprietor upped the residency to four nights a week. The trio then recorded some of their “oddball pop covers” for a CD, The Best of all Possible Worlds, which Durra gave to a publicist. Within two weeks it was receiving prominent play on American college radio and it went on to reach the top five on the playlists. The recently released Rocket Science, featuring Durra’s interpretations of the White Stripes, the Beatles, Stevie Wonder, Quebecois folk songs and Mexican corridos, is now reinforcing his appeal to student listeners.

“I’m not on a ‘say no to mainstream jazz’ soapbox,” he says. “I’m really looking forward to teaming up with the Scottish bass player and drummer, Brian Shiels and Doug Hough, for this year’s Jazz Bar Fringe run, and we’ll be just as likely to play music by Cedar Walton, Hank Jones, Joe Henderson, Annie Ross or Brad Mehldau as, say, Snoop Dog. I just enjoy having a broad palette of harmonic settings and forms and sure, a jazz piano trio playing Blow by Ke$ha is wrong on so many levels. But sometimes I like to see the virtue in junk music. Jazz was once described as the sound of surprise and that’s going to be our aim, to make each piece have something unexpected about it, in the nicest possible way.”