The Prime Minister’s chief adviser, Dominic Cummings is to release a charity single featuring an update of Sly and the Family Stone’s 1971 hit Runnin’ Away. 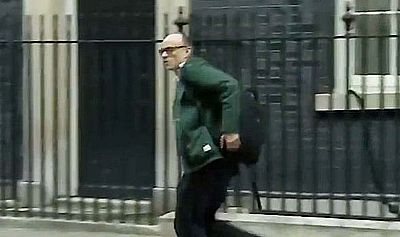 Mr Cummings, who recorded the song with his band, Dom and the Kin Cabinet, has revealed that he was known as ‘Sly’ at school due to his obsession with the San Francisco soul brothers and sisters and particularly their leader, Sylvester ‘Sly’ Stewart.

In an exclusive interview he said, “I was always singing Sly and the Family Stone songs in class, especially Everyday People because I liked its message that there was no room for prejudice in the world. I think its catchphrase of ‘different strokes for different folks’ has been an influence on my ability to get a message across in a short, pithy phrase.”

Mr Cummings went on to confirm that Sly Stone’s music played a major part in his teaming up with Boris Johnson.

“When I first met Boris, I sang I Want to Take You Higher to him and I think he saw this as my way of letting him know I could help him achieve his goals,” said Mr Cummings. “Of course, once we were in Downing Street together, Sly’s Dance to the Music became instrumental in guiding Boris in the right direction.”

Mr Cummings’ decision to make a record came last Friday as he ran from No 10 and felt that his body language suggested the rhythms of his hero. For the B-side he elected to pay homage to another favourite, Phil Spector, with Da Dude Dom Run Run, Da Dude Dom Run.

“We cut both songs in one take over the weekend,” he said. “I’m well connected in the music industry, as you’d imagine, and I was able to get the musicians we needed to record their parts while social distancing in their own home studios. We’re going to rush it out on April 1st and all profits will be going to my answer to the Me-Too movement, Me First.”