The recording, which was completely unplanned, is comprised of tracks from the trio’s Parliamentary Jazz Awards Album of the Year-winning debut album, Turas, along with group improvisations, and is taken from the group’s recent concert for Black Mountain Jazz in Abergavenny.

“We felt that we’d built up quite a strong momentum with the gigs we played in the first ten or so weeks of this year, when we had particular success in Southampton, Sheffield and Manchester,” says McCreadie, who followed up his Best Instrumentalist prize at the Scottish Jazz Awards 2018 by winning Best Album, for Turas, at the corresponding awards in 2019. “Then everything got cancelled, as it did for every musician, due to the Covid-19 pandemic and we lost a lot of gigs we were really looking forward to playing.”

When the trio played for Black Mountain Jazz in February, the sound engineer offered to record the gig and on hearing the recording a few days later, McCreadie, bassist David Bowden and drummer Stephen Henderson were surprised by its clarity.

“It’s quite raw,” says McCreadie. “But it’s very alive and it captures the performance and gives a good example of how tunes can be very different from gig to gig. Even so, we didn’t intend to release it but then given the strange circumstances we all find ourselves in, it gives us a chance to keep in touch with our audience. David, Stephen and I also feel it’s one of the best concerts we’ve played so far, so it makes sense to share it with the people who have supported us.”

The EP will be available through Bandcamp and all the CDs and sleeves will be specially made by McCreadie for each order. There are no plans to make the recording available digitally and the CD is only due to be available for three months.

“We’d be privileged if people wanted to have an hour of us live in their homes,” says McCreadie. “Hopefully it can bring some comfort and take people’s minds off what’s going on in the world during this confusing time, and if people can forget where they are for even just a minute and be tied to the moment, that is an incredibly affirming thing.”

The Fergus McCreadie Trio, Live at Black Mountain is available at the suggested minimum price of £6 including post and packaging here. 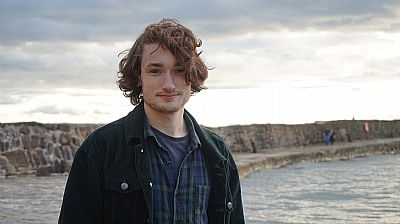