One of Scotland’s leading harpers, Karen Marshalsay celebrates Robert Burns’ birthday with an online “harp hang” from her kitchen on Saturday, January 23 from 7pm.

Karen is a master of all three Scottish harps – the warm sounding gut harp,  the clear ringing wire-strung clarsach and the baroque bray harp with its buzzing sitar-like effect. She released her first album, The Road to Kennacraig, in 2019 to enthusiastic press responses including a four star review from The Scotsman.

With a particular interest in playing pipe music on the harp, Karen has worked with Allan MacDonald, of the famous Glenuig piping brothers, featuring in his acclaimed pibroch concerts, including the Edinburgh International Festival’s Herald Angel Award-winning From Battle Lines to Bar Lines series in 2004. She also featured in the National Piping Centre’s Ceòl na Piòba concert in 2013 and has worked with African, Paraguayan and Indian musicians on multi-cultural projects including Yatra, which premiered at the Edinburgh Mela in 2008.  More recently she guested with the Russian String Orchestra, playing her own compositions, during the Edinburgh Festival 2018.

The Road to Kennacraig was produced at Temple Studios by Robin Morton, a founder member of internationally regarded folk band Boys of the Lough and one of traditional music’s top producers whose credits also include Dick Gaughan’s classic Handful of Earth, Alison Kinnaird’s seminal The Harp Key and albums of Gaelic singing by Flora MacNeil and Christine Primrose.

As well as appearing in solo concerts, Karen is a member of Irish folk music legend, flute and whistle master and singer Cathal McConnell’s trio. She has also produced new works for Celtic Connections’ New Voices series, Hands up for Trad’s Distil showcase concerts, and Drake Music Scotland, and she was Composer in Residence with Harps North West in 2016.

Tickets for the harp hang, priced £5, are available through paypal.me/karenmarshalsay by adding email address to received the link. 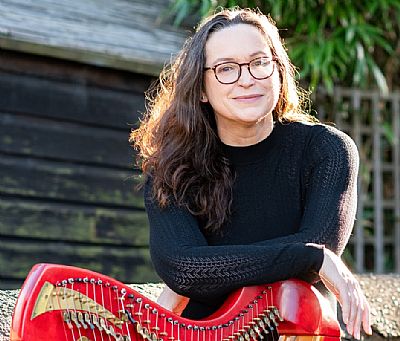