Peter Johnstone - on the road to being an All-Star 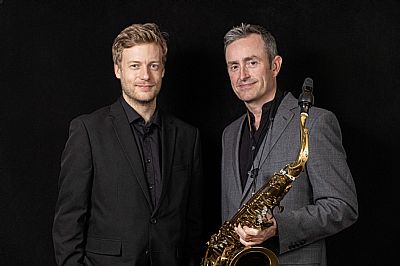 Peter Johnstone remembers the audition only too well. Not just because he was unsuccessful but also because the band leader he was auditioning for, saxophonist Tommy Smith, has turned the story of Johnstone’s unsuitability – back then at least – for the Tommy Smith Youth Jazz Orchestra into a mirthful onstage routine.

To Johnstone’s credit he laughs, too, at the tale of how he and his school pal, the now-London-based drummer Corrie Dick, turned up at the Lot in Edinburgh on the afternoon before Smith’s youth orchestra was due to play a concert. The Lot is no longer but at the time it was a jazz venue of some prestige. The ultra-hip pianist-keyboardist Robert Glasper, who these days plays in venues ten times or more the size of the Grassmarket niterie, and Norwegian bass master Arild Andersen are among those who graced the Lot stage.

Johnstone and Dick arrived to be given their parts for a piece of music that Johnstone doubts he would be able to play even today. It didn’t go very well, he says, and he retired from the stage feeling suitably deflated.

“I didn’t run away and hide, though,” he says. “I stayed and listened to the orchestra’s concert and that was really inspiring. It encouraged me to go away and practise.”

At that time Johnstone was starting to get some gigs from Bill Kyle, long-time jazz promoter, mine host of the Jazz Bar in Chambers Street, Edinburgh and an irreplaceable loss when he died in 2016. Kyle was a great encourager of young musicians particularly and Johnstone’s fellow pianist, Alan Benzie had been the beneficiary of Kyle’s sometimes last minute, not to say late night calls in search of a piano player. With Benzie off studying in Boston, Massachusetts, Johnstone became Kyle’s go-to pianist.

“That really helped my playing,” says Johnstone. “Sometimes you’d go in not having any idea of what tunes you were going to be asked to play. It could be a baptism of fire, as the TSYJO audition had been, and after about six months of playing regular gigs there, Tommy thought I’d improved and invited me to join the youth orchestra.”

The story of Johnstone’s progress is possibly even better than Smith’s eulogising onstage version. Johnstone went on to win the Young Scottish Jazz Musician of the Year competition in 2011, as the aforementioned Benzie had done four years previously. He also enrolled for the jazz course that Smith initiated at the Royal Conservatoire of Scotland and graduated with honours.

Then, having served an apprenticeship with Smith’s youth jazz orchestra, Johnstone moved up to the Scottish National Jazz Orchestra, where he has accompanied such exemplars as Mike Mainieri, vibist and leader of iconic jazz ensemble Steps Ahead, the former Miles Davis saxophonist Bill Evans and the flamboyantly virtuosic vibes master Joe Locke.

On top of this, when Smith formed the quartet he chose to pay homage to his greatest influence, John Coltrane, he immediately thought of Johnstone – the pianist who, a few years before, he didn’t like at all. Johnstone’s playing in the ‘Coltrane’ quartet has been such that Smith has taken him on as a duo partner – they made their debut as a duo at Rochester Jazz Festival in New York during the summer. And to add the irony of the failed audition, Johnstone has become the first graduate of Smith’s RCS jazz course to return as a teacher.

Not surprisingly, the Tommy Smith Youth Jazz Orchestra All-Stars, who next Thursday will play on Smith’s final concert of the series he has been asked to give as part of the Queen’s Hall in Edinburgh’s fortieth anniversary, will feature Johnstone on piano. Smith will also feature, playing a solo saxophone set.

“The thing about the all-stars tag is that there are I don’t know how many more musicians who could have been brought in to appear,” says Johnstone. “Even allowing for the orchestra having been in existence now for seventeen years, there has been an amazing turnover in talent. Some, like saxophonist Leah Gough-Cooper, who is in the all-stars, and Helena Kay, who won’t be with us, have gone on to live and work in New York, and if everyone brings CDs with them, there could be quite big merchandise stall.”

One graduate of TSYJO who won’t be on the gig is pianist Fergus McCreadie, who recently won the Album of the Year category in the UK’s top jazz honours, the Parliamentary Jazz Awards for his trio’s debut album, Turas. McCreadie’s drummer, Stephen Henderson is another TSYJO graduate and the pair agree that the experience of playing in the youth orchestra (Henderson is returning as an All-Star) was really useful, even if orchestral jazz isn’t either musician’s top priority.

For Johnstone, who, like McCreadie’s trio, went on to win the prestigious Peter Whittingham Jazz Prize for developing musicians, in his case with the band Square One, the combination of Smith’s light touch as a conductor and the challenging nature of the repertoire makes time spent with TSYJO priceless.

“There’s absolutely no sense of the material being dumbed down,” says Johnstone, who has returned to TSYJO on occasion when the piano stool has been left unexpectedly vacant. “The music is the same, in every case, as the arrangements that the Scottish National Jazz Orchestra will have performed in concert not long before. And those will be charts that have been written by some of the top arrangers around today. It’s great preparation for playing in the Scottish National Orchestra, and there’s a few of us in the All-Stars who have made the step up to the ‘big orchestra’ now.”

If playing in the Scottish National Orchestra fulfils a dream for Johnstone – he happily concedes that, in that situation, he’s among idols that he grew up listening to and hoping to emulate – then teaching the next generation of Scottish jazz players is a completely unexpected honour.

“It happened organically, really,” he says. “I was hanging around the course after I’d completed my degree because I wanted to go on and study for a doctorate. So I think they felt they should give me something useful to do.”

The teaching he finds a pleasure but the big lesson for Johnstone and his contemporaries, he says, is to watch out.

“The standard of musicianship among these young players is phenomenal,” says Johnstone. “People are arriving into the department in their first year knowing more than I knew by the end of my time studying. It’s amazing. A lot of them will have been on the Jazz Juniors course, which started two or three years ago, and they’re really upping the ante. For instance, we have students on the BMus Jazz Course who are already good enough to get gigs at Ronnie Scott’s in London, albeit in support slots, and it just seems like, in next to no time, they’re going to be grabbing all the attention and musicians my age will have a short time in the sun and then we’ll have to make way. That’s a bit scary but at the same time, it’s really inspiring to see – and hear – these musicians coming through.”

“It’s good to know that you’re on the right track,” says Peter Johnstone of his success in winning the Young Scottish Jazz Musician of the Year 2012 title in August.

Having appeared in the previous five finals and watched friends and band mates step up to receive the first prize each time, twenty-two year Peter must have thought that the title was always going to elude him. But his success at the sixth attempt is a tribute not only to his piano playing - and composing – talent but also to the dedication he’s shown since beginning jazz piano lessons at the age of sixteen.

Although he actually began playing piano aged five, it wasn’t his first instrument. His mother being a violinist wanted Peter to follow her example and started him on a small violin at a very early age. He decided it wasn’t for him, however, and persuaded her that he would apply himself to the piano instead. And he did: he spent ten years studying classical piano, which gave him a good basis for switching to jazz. But there’s another twist to this story.

When he was eight, Peter took up the trumpet and went on to play in youth big bands (he could still do a job on trumpet if asked) and it was this that turned him on to jazz.

“I don’t know why I hadn’t thought of it before but I must have been in fifth year at school and I was listening to the radio one night when an Oscar Peterson track came on,” he says. “And I suddenly thought, I could translate what I’ve been doing on the trumpet onto the piano.”

He began taking lessons with Paul Harrison, pianist and keyboards player with Scottish groups Trianglehead and Breach and now jazz piano tutor at the Royal Conservatoire of Scotland, travelling through to Edinburgh from his home in Milngavie (pronounced “Mull-guy”),  just outside Glasgow. Then, having joined Strathclyde Youth Jazz Orchestra on trumpet he was able to call on Dave Patrick’s tuition at Strathclyde University. Gigs on piano with the university’s smaller jazz combo led to SYJO chief Stewart Forbes suggesting that there might be an opening for a young piano player at Bill Kyle’s Jazz Bar in Edinburgh on Saturday afternoons.

So began an intense ‘apprenticeship’ and some good training for the life of a jobbing musician. Trio gigs at the Jazz Bar on Saturdays led to Peter playing piano in the venue’s big band on Mondays and often appearing in the World Premiere Quintet, where five musicians who might not have met before are thrust together on the Jazz Bar stage and decide the repertoire on the spot.

At this point Peter was also playing with the National Youth Jazz Orchestra of Scotland and its more compact Collective and was shortly to enrol on the Royal Conservatoire of Scotland’s jazz course and join the Tommy Smith Youth Jazz Orchestra. There were other gigs on the horizon, including drummer Corrie Dick’s quintet with whom Peter recorded the Scenes for Someone digital album.

“Looking back on my first year at the Conservatoire, or RSAMD as it was back then, I remember always feeling very tired,” he says, laughing. “I didn’t drive at the time and I’d go through to the Jazz Bar on Mondays, do the big band and the late night jam till 3am, stay in a hostel, get the bus back to Glasgow in the morning for a 9am lecture and then head back to Edinburgh at night for the Tuesday jam.”

The RCS jazz course, he says, is totally inspiring. It’s been a great help in developing his own trio with fellow students, bassist Brodie Jarvie and drummer John Lowrie, and working alongside Tommy Smith, both on the course and in the saxophonist’s youth orchestra, has proved hugely motivating.

“Tommy encourages you to compose right from the start and that’s something I’ve been working on a lot for my trio,” says Peter. “It’s also been great getting to record with TSYJO and to play the same charts as the Scottish National Jazz Orchestra – as it has such a vast and diverse library. I’d like to record with my own trio at some point and get out and play outside Scotland. There’s a gig at London Jazz Festival as part of the Young Scottish Jazz Musician of the Year prize, which is a scary thought at the moment. But I feel really comfortable playing with Brodie and John. I think we’re developing a definite group identity and it would be great to get out there and let people hear it.”